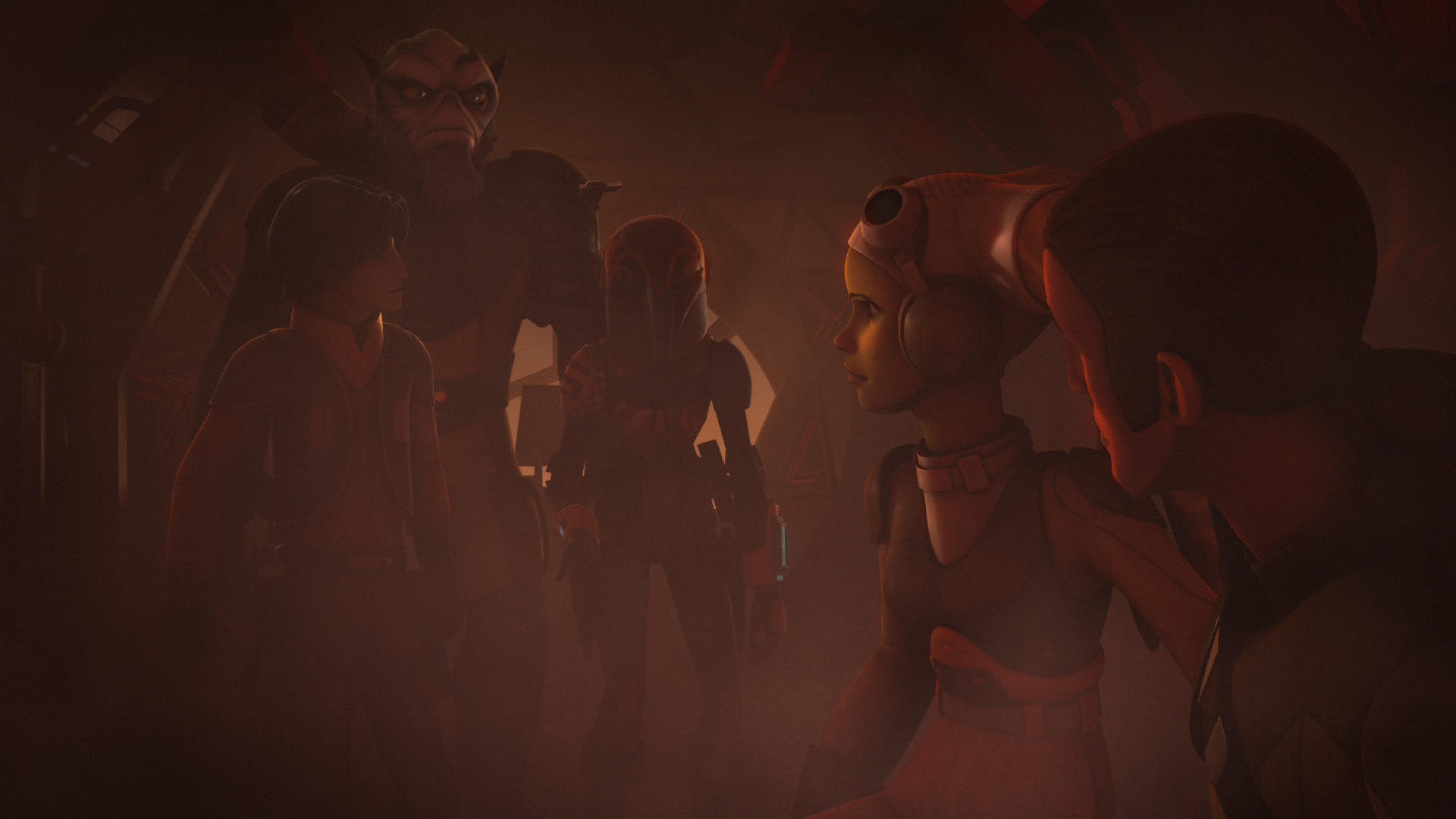 Now here’s that commendable follow-up from the underwhelming space-whale plot of the previous Star Wars Rebels episode, “The Call.”

This second season has been fixated on the individuality of the cast, and in “Homecoming,” Hera Syndulla receives her overdue development after her mellow starring-role “Wings of a Master.”

Hera and the Ghost crew face major losses in the Rebellion and she must conspire to steal a colossal Empire carrier ship above planet Ryloth to house their Rebellion ships. She is forced to contact Cham, the Twi’lek rebellion leader of Ryloth, who has crucial intel about the Empire carrier they are targeting to hijack.

As I had viewed the Ryloth arc in the Season 1 Clone Wars story, I will admit that Cham Syndulla was rather one-note, a plot device for Mace Windu’s exploits, though well played with prideful conviction by Robin Atkin Downes. Because Rebels has a more intimate scope of focus, Cham is as granted a substantial character arc, sophisticated, smug and hardened, but earnest about his lengthy fighting cause. I wish the animators showed (rather than tell) the mentioned state of Ryloth, but Downes’s performance has us trust that Cham knows about the Ryloth’s conditions more than we do.

You’ll hear me wish aloud that Rebels is as ambitious and brilliant as visually-pleasing kid-demographic productions like Steven Universe or Avatar: The Last Airbender (which Dave Filoni was involved in), both of which embroil the weighty war narrative and world-building. It’s when the show spurts toward merited greatness does it live up to its potential. Rebels can handle themes for children with tacit sensibility—blind optimism vs. optimism, the price of hope, the effects of trauma on trust, the frailties of being a teacher (Kanan’s arc), etc. As for its limitations in worldbuilding, the show’s aversion to displaying grand realms, perhaps explaining why season one recycled set-pieces of planet Lothal, is an obvious gap that summarizes the overall shortcomings. But let me save this elaboration for the end.

I come to a scene between Hera, Ezra, and her father to validate why I watch Star Wars Rebels despite often sitting through family-friendly goofiness that plagued its weaker episodes. Like Ezra, we’re baited into assuming that the bad blood stems from Cham prioritizing his Ryloth over family. Ezra seems to think so, giving Cham a passive-aggressive “There’s nothing more important,” not just out of esteem for Hera but also so he can project his personal psychological insecurities—Remember, Ezra grew up with the abandonment-issues belief that his parents were casualties to their cause. But Hera does not explicitly state that family matters was the concern, so keen viewers can infer that the core conflict is that Cham’s fervent nationalist intentions rather than fatherly neglect. Hera has achieved a balance between her duties to the universe and her loyalty to her Ghost family, so what does she want out of Cham? Turns out, it isn’t love she desires most out of him. It’s really respect.

If there’s a spark of superb voice-acting by Vanessa Marshall, it’s the instance when Hera’s inflection lapses into an inferable Twi’lek accent (French, to align with Downes’s accent) when she is debating her father, a slippage of vulnerability. The acting choice instantaneously layers the family tension without defaulting to troperrific flashbacks method. She may have unlearned the accent in her independent adulthood, but she hasn’t outgrown her heritage. What a way to demonstrate both cultural and psychological edge in a few seconds of dialogue.

As recapped to non-viewers of The Clone Wars, Cham had been aided before by the Republic, but the benevolent Republic’s transformation into the domineering Empire has wounded his trust in establishing outside alliance (owing to the confusing complexity of Chancellor Palpatine/Darth Sidious controlling the politics). Cham wants Ryloth freed, and openly declares that Hera’s fight for the entire universe is a waste of time and talent. Hera does want her home Ryloth saved, but she refuses to reduce her fight for freedom to only Ryloth’s welfare. It’s incidental in this specific mission that she can concern herself with her old home. Their ideals of freedom are the same, but their aims differ.

The rebels need to steal that Empire cell-carrier ship for the Rebellion, something I’m surprised they haven’t attempted before. The carrier had been terrorizing Ryloth for years, and a snippet of dialogue Hera (“I know what cell you’re talking about”) lived under its looming threat in her childhood.

But Cham wants to burn the carrier, so his suffering people on the planet can see it burn in the skies. The context treats this as myopic patriotism, so his people can have a tangible view of hope.

But Cham and his two warriors pretend to comply with the original plan, but once he and his warriors board the Empire carrier with Hera and the Ghost crew, he double-crosses them and proceeds to make attempts to destroy the carrier. Which does beg the question whether he worked out an escape plan with Hera and the crew once he managed the deed. The episode moves too fast to answer this.

Now the urgency becomes worse when the Empire contacts reinforcements, so Hera, Kanan, and Ezra escape and reach the helm before Cham. In a surprisingly well-paced moment, Hera makes one of her speeches about why stealing a carrier is more productive, knowing the Empire would just send another carrier to bully Ryloth. Her words sways Cham’s warriors, who vouch for Hera, and although the borderline extremist Cham is not easily persuaded, he realizes he has to give his daughter breathing space to prove him wrong and withholds his intervention.

The Empire reinforcements allows Cham to have his chance to burn down an Empire ship before his people and still let Hera get the carrier she needed. While one can argue it was a convenient writer’s saving-throw so the episode can wrap up neatly, “the everyone’s wins” method Kanan refers to, it was a means to remind the audience that Cham’s objective is not wholly invalidated. It’s more overriden by reason of circumstances, but that doesn’t mean it lacked legitimacy and that is affirmed by a mention of Ryloth supporters feeling emboldened, though I’m disappointed we don’t get to see Ryloth’s denizens cheering. The show has tapped into the significance that wars aren’t won by just physical combat but also through verbal methods and symbols—Ezra’s radio speech last season is proof of this.

Also, little Numa, the blue Twi’lek orphan who charmed clone soldiers in “Innocents of Ryloth,” has blossomed into Cham’s Ryloth warrior, even if she’s a glorified plot relevant Easter Egg. I wish the writers took the opportunity to flesh her and her fellow warrior out in order to sell their motivations for Ryloth. After all, they are the audience ties to the unseen Ryloth.

We could have been shown the uprising of Ryloth or hear their sounds or holograms of the Twi’lek citizens. I have been noting that certain worlds are kept out of viewers’ eyes. I chalk it down to the creators not having as much budget to render grander-scale worlds unlike The Clone Wars. Remember how we saw Mustafar without landing on it in the season one finale? We never explored the enigmatic planet Lasat in “Legends of Lasat” but that was a wise choice to cloak an ancient world in the mystique. The series might benefit should they be allowed to expand on their visuals.

The ensemble takes a backseat to the main conflict, but they have remarkable contributions. Comedic gold: Kanan trying to be dignified upon meeting Cham, which KananXHera shippers like to attribute that to him facing his “father-in-law,” though the fact that Cham fought alongside Jedi is another reason. Ezra and Kanan hone their Force pull-and-push skills into a swift fly-through sequence through a succession of closing corridors, proving that the parent-figure entrusting child is a healthy relevant motif. Kanan allows Ezra to execute his first effective Jedi mind trick on the carrier commander, leading to a funnier instance of Ezra milking it a bit. Sabine and Zeb earn strategic credit for rigging a tiny Empire droid with a bomb. And ah, there are little teases of Chopper’s backstory.

Regardless of its imperfections, “Homecoming” is empowered by the potency of direction and character, something every Rebels episode deserved from the outright. 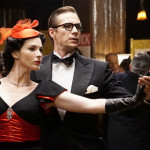 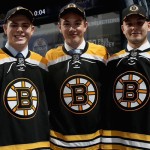