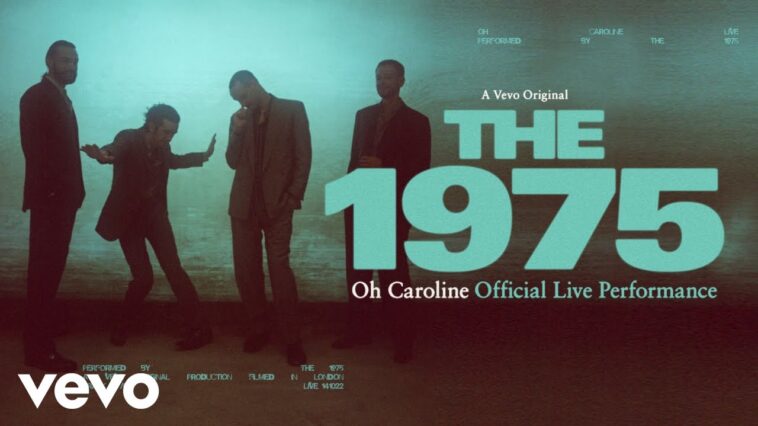 Vevo, the world’s leading music video network, announces the release of The 1975’s Official Live Performance of “Oh Caroline” off their new album Being Funny In A Foreign Language, out today via Dirty Hit. Vevo’s Official Live Performances are the result of close creative collaboration with artists and their teams, resulting in a series of very special exclusive performances. The 1975 previously worked with Vevo in 2017 on Vevo Presents performances of “Somebody Else,” “Lostmyhead” and “Medicine.”

Official Live Performances are the flagship original content for Vevo, working with the biggest names in music. Specifically tailored creatives meant to fit the vision of each individual artist chosen, these performances connect artists with their global audience of fans adding to their visual library.

“We loved working with Vevo on these videos,” said The 1975, “they are the perfect extension to our campaign and we are grateful to have so many collaborative partners around us.”

The 1975 closely collaborated with Vevo’s team to create a completely bespoke set that had the ability to be constantly evolving. “Oh Caroline” begins with a close up of a box of matches in front of a guitar. The camera pans to frontman Matty Healy, smoothly lighting a cigarette with one of the matches as he stands in front of a teal-tinted curtain. His red guitar stands in stark contrast to his dim surroundings, the room suddenly flashing with strobes before Matty fades into a silhouette.

“We’re thrilled to be working with The 1975 again!” says Carl Young, Head of Music & Talent, UK, “Their 2017 Vevo Presents performances left a lasting impression on us and our audience, and since then we’ve been eagerly awaiting the perfect next opportunity to work with them. They were absolute professionals every step of the way – from creative conception, to the actual shoot, post-production and beyond, they’ve been ready, willing and eager to partner. Close collaboration and enthusiasm truly makes all the difference with these performances, and we’re so privileged to have had the opportunity to bring such vibrant, unique performances to their fans.”

ABOUT VEVO: Vevo is the world’s leading music video network, connecting an ever-growing global audience to high quality music video content for more than a decade. Founded by Universal Music Group and Sony Music Entertainment in 2009, Vevo offers fans worldwide a vast array of premium content to choose from, showcasing official music videos alongside a constantly developing lineup of live performances and innovative original programming. From top superstars to rising new talents, Vevo brings incomparable cross-promotional support to artists across the musical spectrum, at every stage of their careers.

Vevo has consistently evolved over the past decade to lead within today’s ever-changing media landscape, embracing partnerships with a number of leading distribution platforms to deliver extraordinary content within ad-supported environments. With more than 26B views across television, desktop and mobile devices each month, Vevo brings music videos to the world – when, where, and how fans want them.