Taylor Swift dropped the news of her new album while accepting the award for Video of the Year — the third win for her 10-minute version of “All Too Well” during the MTV VMA’s Sunday evening. The record entitled ‘Midnights’, will be out Oct. 21, it marks her first new music since 2020’s Folklore and Evermore and her 10th studio album.

Taylor Swift then took to social media to make an official announcement for the album saying;

“We lie awake in love and in fear, in turmoil and in tears,” she wrote. “We stare at walls and drink until they speak back. We twist in our self-made cages and pray that we aren’t – right this minute – about to make some fateful life-altering mistake. This is a collection of music written in the middle of the night, a journey through terrors and sweet dreams. The floors we pace and the demons we face. For all of us who have tossed and turned and decided to keep the lanterns lit and go searching – hoping that just maybe, when the clock strikes twelve … we’ll meet ourselves. Midnights, the stories of 13 sleepless nights scattered throughout my life, will be out October 21. Meet me at midnight.”

When Swift took the stage to accept her award, she acknowledged that the majority of directors nominated were women, and thanked her fans graciously;

“I’m so honored to have been recognized alongside such amazing artists and directors in this category,” she said. “I just want to say I’m so heartened by the fact that for the first time in VMA history four of the directors nominated in the Video of the Year category are women.” 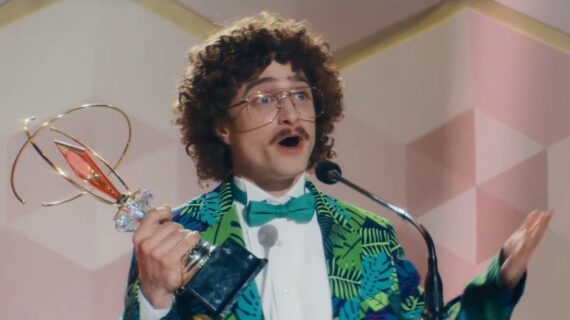