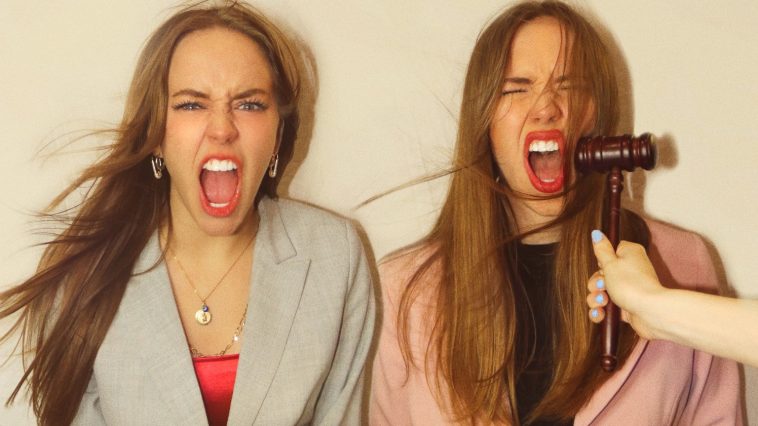 Known for their unapologetic take on life experiences and lush harmonies, KTJ & CARLY return with a semi- departure from their usual pop sound. With influences that range from artists like ROZES, JoJo, and PVRIS, the duo released their critically acclaimed debut “Identity EP” in 2020. Their more recent releases, including “Reckless” and “Hidden,” were praised for their songwriting style and ability to bring a story to life. Of their work on “Reckless,” Earmilk said, “This new release has intensity, yet, with an underlying soft vulnerability hidden within the hyper-expressive lyrics.”

On the attitude-infused pop-punk track “Daddy’s Little Lawyer,” the duo gets gritty and wild with striking vocals, electric guitars, and booming drums. Their songwriting style remains starkly in the spotlight, as they tell the story of an egomaniac whose sense of entitlement extends into every aspect of their relationships. Their fiery vocals serve as a warning while the instrumentation swells and reverberates beneath their damning message, rife with frustration and resentment. Never ones to mince words, the duo cement their status as transparent, honest songwriters who refused to shy away from their truth. KTJ & CARLY explore a new direction and make it all their own on the pop-punk-inspired “Daddy’s Little Lawyer,” the lead single off their forthcoming EP out later this year. 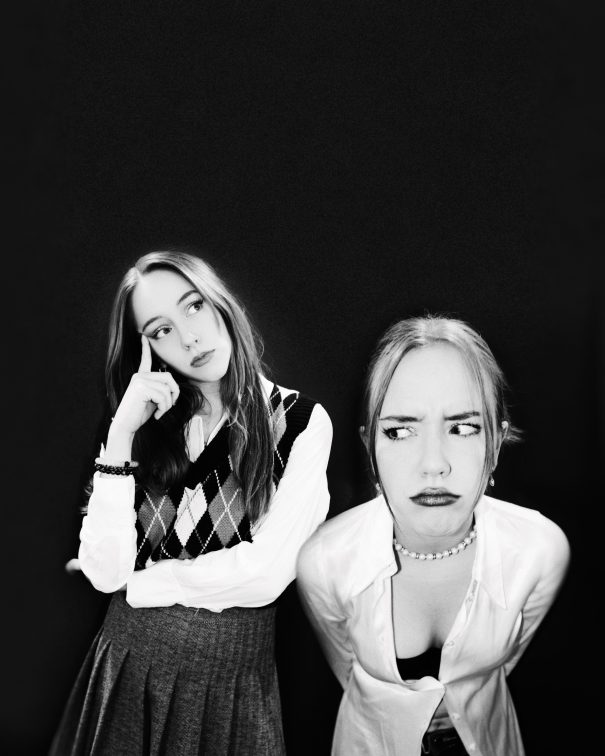 Ladies welcome back to OLC! Absolute pleasure having you here as always, how have
you both been and have you been keeping safe and well?

It’s a pleasure to be here!

Now I have to say I’m absolutely thrilled that you have a brand new single called ‘Daddy’s Little Lawyer’, what’s the song about and what inspired it?

We have been super excited to release it! The song is inspired by a guy I talked to for almost two years who could never commit. When I finally decided to move on to greener pastures, that is when he apologized and wanted to be serious. The thing is, there’s a certain point when it’s past repair. Plus, at this point frankly, I just didn’t really care anymore about any of it. It wasn’t a negative or positive feeling towards him, the whole situation just wasn’t ever on my mind or made me lose sleep haha. That is kinda what inspired the song. It’s just the feeling of indifference and telling a guy, “look, what did you expect? That I’d be sitting here waiting for you to grow up?” – Carly

Carly was talking to a guy for two years. He could never commit; entitlement and too much money corrupted the relationship. One day Carly said, “hey I’m a boss and I deserve better,” so she ended it. That’s when all of the sudden he wanted to be serious. The songs are about being indifferent about the relationship. – Katie

So talk me through the creative process and who helped you on the track?

We co-wrote this song with the wonderful Stefan PVDS. (who is a great artist and everyone should check out his stuff!) We came up with some strong chords – I just started to practically rant about all my boy problems and it became a song. Literally every single word in this song is based on a true story. After we made the demo, Katie and I took it home and produced it out in our bedroom! – Carly

We wrote this song with our friend Stefan. He’s a killer guitar player and writing with him is so refreshing. Carly just laid down the situation and we all just started talking about it, and we would have responses and she would tell us more and eventually the song was done. – Katie

The single is pop-punk inspired. Do you think this is a new direction in sound for you,
and if so what made you want to go down this path?

We grew up listening to pop-punk as a kid and it has made a huge impact in the way we make music. Paramore, Avril Lavagne, etc… I’m not sure that it is necessarily a direction we will stick on, but we never like to box ourselves into one genre. We are always keeping it pop, of course, but we felt inspired to do something with a bit of rage when we wrote DLL, and it came out as pop-punk-ish. It just felt right for the song. -Carly

This is the lead single from your new EP, what can you tell us about it and what can your
fans expect?

It is a mix of songs where all of them are pretty different whilst keeping a cohesive brand. Think of this body of work as the layers of the ego. We wanted each song to feel like we were stripping the ego back bit by bit to figure out how to rid ourselves of it. That is the experience we were going for in this EP. That is about all we shall tell until the release gets a bit closer. 🙂 – Carly

You’re both quite active on TikTok, what do you love about the platform and how
important is Social Media to an aspiring musician’s career?

For artists, TikTok is now a priority and the number #1 way to blow up your songs. Tik tok is such a great platform to share your music and get to know the world. However I think there’s a lot of pressure to post as much as possible, as the algorithm chooses what it thinks will be popular to go viral but it’s also very random and it’s trial and error. It’s usually the stupid videos that took maybe 5 seconds to put together goes viral, not the ones where we tried. I don’t think human beings are supposed to be a part of the lives of so many different people so fast in one sitting, and I feel like it affects the quality of relationships, patience, and self esteem. Personally, after we post our TikTok’s for the day, I will watch some for a bit to look at trends and stuff, and while it can be very entertaining and very informative, it can become toxic and life draining to scroll. If I could live without a phone, I would, but TikTok is too important for artists. One video could change your life. We have a love-hate relationship with TikTok, as I’m sure every artist does. The thing that we love about TikTok is that there is an even playing field. At the end of the day, whoever works at it the most and stays consistent will get picked up by the Algorithm, it’s just talent and consistency. The down side means you have to post two to three times a day. But I just love how you can share your music and ideas with the world so easily and genuinely share it without having to be mega famous. Tiktok is such an important platform for artists to get on for that reason. It is the easiest and fastest way to get discovered and create genuine artist/fan engagement. As a music patron myself, I have found many new artists through TikTok. – Carly

You have some tour dates locked in also, what do you both love about live shows and
where is your favourite venue to play at do you think?

There is so much I love about playing live. First and foremost, I love getting to experience the music with a person in front of me. I love to play our songs for people and getting to share it live is an otherworldly experience sometimes. Another reason I love to play live is because it gives us an opportunity to keep playing with a song. Even far after we release a song, the song will always continue to grow and adapt as we do as people and artists. There are always fun new ways to play a song and give it new life. – Carly

Do you have any crazy stories from any of your tours or live shows that you
experienced?

We do a lot of shows in Hollywood, so we see a lot of weird stuff at night there haha. The first time we ever performed in Hollywood, we walked outside to find a man in a jumpsuit with dollar bills over it and he was walking a goat. There’s lots of weird things happening there. I’m not sure if we have experienced the craziest thing yet, but I can tell you one of the most fun shows was at the Ridglea Theater when there was a literal mosh pit in the audience while we performed Enable Me. It was so fun. – Carly

Ladies as always it’s an absolute pleasure to have you both here, but before you go is there anything you’d love to say to all your fans out there in OLC! Land?

Thank you so much! It has been a pleasure for us! Go stream Daddy’s Little Lawyer on all platforms! And we love you all. <3 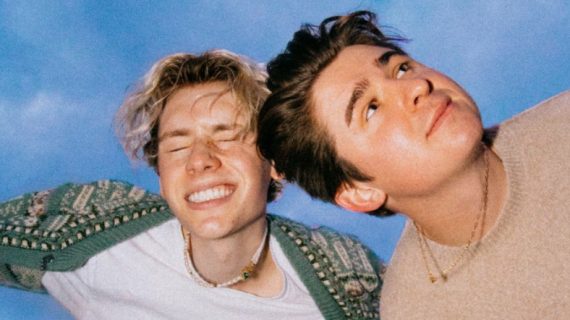 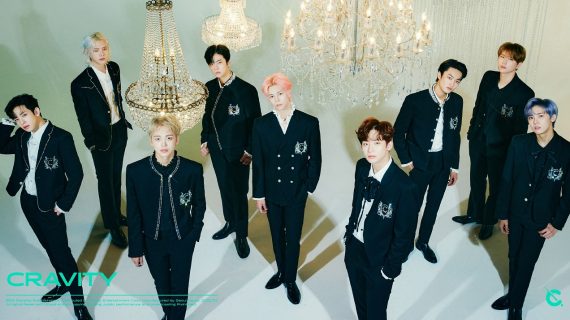