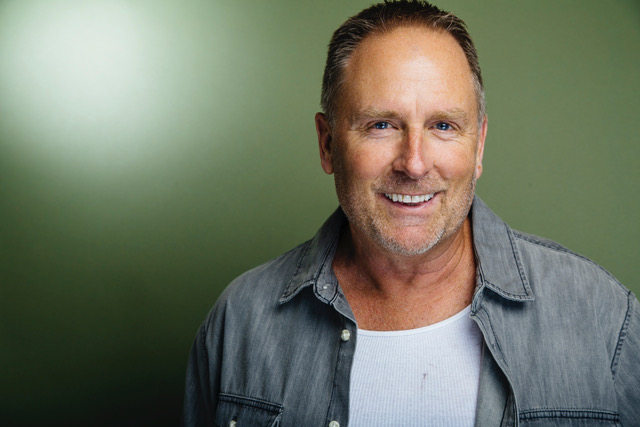 Larkin Campbell is a small-town kid at heart and always will be. He was raised in the tiny, but spectacular mountain town of Estes Park, Colorado. He grew up playing stick-ball in the street, performing in high school plays and working on the school newspaper. Him and his band of lunatic friends started a comedic dance group aptly named, “Campbell’s Crazy Crew”. They performed at high school basketball games, pep rallies and cheerleader camps until they realized nobody was still watching.

He moved to Washington to attend Tacoma Community College and lived with his father in a gorgeous little harbor town named Gig Harbor. He studied acting and journalism before transferring east across the state to attend Washington State University.

While there, he perfected the art of procrastination and tomfoolery while studying Broadcast Journalism and Theatre. While visiting Los Angeles on spring break of his senior year at WSU, he put in a request for an internship at the hit TV show Entertainment Tonight. His request was granted and upon graduation, he headed for the bright lights of the big city.

Interning and then being employed at Entertainment Tonight opened his eyes to the big business of show business. He worked the red carpets at the Golden Globes Award shows and he was hooked. He moved on to work for other productions as a Production Assistant and personal assistant for Tom and Rosanne Arnold. 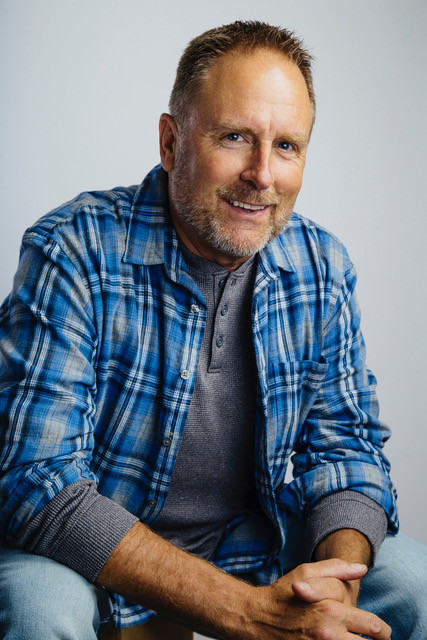 He spent many years working as a stand-in and photo double on dozens of big budget movies such as ARMEGEDDON, LETHAL WEAPON 4, MYSTERY MEN, ESCAPE FROM LA, HARD RAIN and dozens more. All the while hustling down agents and casting directors and anyone who would give him a look. He joined the Screen Actors Guild in 1995, and has never stopped chasing down the next role or opportunity. His hard work has paid off in dozens of roles in film and TV. Highlights include guest starring roles on CSI: NY, LAS VEGAS, CRIMINAL MINDS and a bucket list supporting role playing COACH SHANE, opposite Steve Carell and Ed Helms in THE OFFICE.

He has written, produced and starred in over 25 short films and video projects which have gone on to win many awards at film festivals all over the country. His work has been published in multiple parenting magazines, describing the life of a stay-at-home-parent, trying to juggle the rigorous life of an actor. He recently chronicled his 30-year career in a hilarious and heartfelt memoir titled, A VIEW FROM THE MIDDLE. How an unknown actor managed to stay that way. Available on AMAZON BOOKS. —IMDb Mini Biography By: Larkin campbell 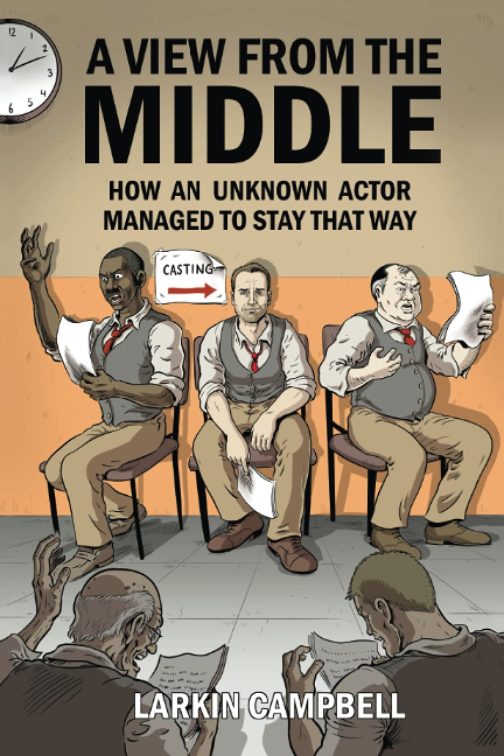 Hi Larkin welcome to OLC! So for everyone out there in OLC-land tell me a bit about yourself and how you got into acting?

Hi guys. I first got into acting in high school and I loved every second of it then I pursued it in college, it was such a nice break from having to study hard courses and I loved the thrill of rehearsals and performing on campus for my friends.

Do you remember your very first time on set was it everything a young actor dreams of?

When I first got to California upon graduating. I had a degree in radio and television broadcasting, but I wasn’t exactly sure how to make that a career. So I started working as a production assistant on TV shows, commercials, and movies. I was basically getting coffee, making copies, and doing grunt work. But I loved being on set, wearing a radio and having a small part and helping these productions get made. Being on a movie set, or a television show was always thrilling to me, but at that time I wasn’t really thinking about acting, I just loved the thrill and the energy surrounding a set with all these people working together as I worked on multiple movies as a production assistant, I was interested in a new avenue that I’d never heard of. Being a stand-in. A stand-in basically stands in front of the cameraman and the lighting crew as they set up the scene. It’s a real union job, and the pay was pretty good and your main job was to pay attention all the time and do exactly what the actors did. I loved it so much and I couldn’t believe this was a real job but I did it for about eight years.

I got a job as Mel Gibson’s stand-in on lethal weapon four and I could not have loved it more. Because I was there every day helping light those scenes, they put me to work filming behind-the-scenes footage so I got to be around Mel Gibson all the time. He was an energetic professional, and a lot of fun to be around back then. One day I got lucky and they threw a policeman’s uniform on me and I got my first speaking role in a movie alongside Mel Gibson and Danny Glover. It was such a fantastic feeling to be in a fake police car with Danny Glover and Mel Gibson. It was a magical day for me. I’ll never forget it.

One role I was interested to read about was that you were in the short lived drama series ‘Flashforward’, I have to say I enjoyed that series so much in it’s limited time, it was such a great concept, what was it like being on that show and do you hope some one would reboot it?

Yeah, that show flash-forward was a hoot. I had auditioned a couple of times but hadn’t gotten anything yet. Then I got a call that I didn’t even audition for as a helicopter pilot. I didn’t have a bunch of dialogue but they said I would be in multiple scenes so I was thrilled. We got to shoot a couple of scenes in a rundown, fake Middle Eastern town. We had to duck and cover from stunt man’s explosions and fake gunfire all around us. I was with a fantastic actor Dominic Monaghan from lost, and we had a ball taking Cover behind abandoned cars together. In my episode, they killed the helicopter pilot which was me, and I fought hard to stay alive in my scene but too bad for me I was killed. That was a really fun job.

What’s been some of your most memorable moments of your career?

Some of my most memorable moments on set I would have to say the best one of all was when I worked on the Office, with Steve Carell and Ed Helms. I was playing a baseball coach and those two idiots had to come out and see what kind of a coach I was because Steve Carell was having an affair with my wife. It was so much fun being the only actor on set with those two comedy giants. I had lunch with them and rode around in the van with them and literally had one of the greatest days of my life. They were both very gracious and it was very inspiring to me to see how normal they acted and how polite and professional they were with a guy like me who was just happy to be there.  I also really enjoyed the roles I had on Grey’s Anatomy and CSI New York to name a few. CSI New York was wonderful because I got to work with Gary Sinise who is one of my idols. Another wonderful job was on Clint Eastwood‘s movie, J Edgar, to be directed by Clint Eastwood is about as much as any actor could ever ask for so that was a glorious day.

You now have a book out called “A View From The Middle: How An Unknown Actor Managed To Stay That Way”, tell me what it’s about and why you decided to write it?

Days like those were the main reason I’d decided to write a book about my 30 years in the screen actors guild. I never became a household name, but that didn’t matter to me because I was having so much fun. I didn’t mind the rejection of over 500 auditions that I didn’t get. The little jobs that I did get led me to some wonderful days on set with some giant industry people. I enjoyed every second I was on set and I hope to get back on set again. But I wrote the book to inspire people, young actors, and just to inform people who are fascinated by this business. I come from a very small town in Colorado and I have never lost that wonderful feeling of being in this business. It never got small to me when I was working next to somebody famous.  And my book is basically about if a guy like me can do it, if you keep your head down and want to work as hard as we possibly can, and then a little bit harder. Good things can happen to you.

Your also about to star in the upcoming Steven Spielberg ‘The Fabelmans’ is there anything about that movie you are able to tell us about?

Late last year I was offered a small role in the next Steven Spielberg movie called the Fableman. It was an amazing two days on set with Spielberg and I got to be in a scene with Paul Dano. . I’ll have to add another chapter to my next book because that day was glorious to me.  I  actually was on set With Spielberg years ago on one day of saving Private Ryan, where I also got to hang out with Tom Hanks for a day. These stories and many more can all be found in my book, you can go to Larkin Campbell (larkinsworld.com) and it will take you right to Amazon. Thank you for your time.  I hope this gives you what you need 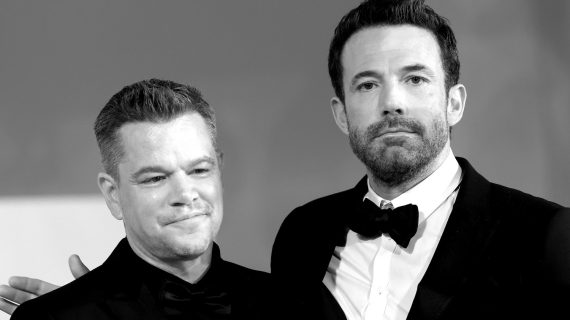